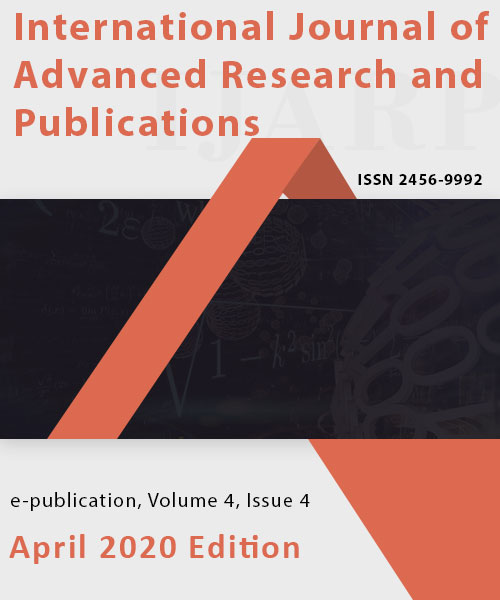 Things are as they are because they were as they were.
THOMAS GOLD, 1920 TO PRESENT
Astrophysicist

This work is licensed under a Creative Commons Attribution 4.0 International License.
Show sidebar

Author(s)
Ntinya C. Johnson , Benbella Iorliam
Keywords
Hypothermia, Vitamin E, Blood Parameters, Electrolytes and Rabbit.
Abstract
Effects of oral vitamin E supplementation on blood parameters and some electrolytes in acute hypothermia of rabbits were investigated. 24 New Zealand White rabbits, weighing 960 – 1000g were randomly divided into one of three experimental groups: 1 (control, without cooling); 2 (hypothermic) and 3 (hypothermic with vitamin E supplementation). The rabbits of group 3 received daily oral supplementation of 460mg/kg body weight (BW) for 4 days before inducing hypothermia. 24 hours after the last vitamin E supplementation, the rabbits of groups 2 and 3 were cooled by immersion into cold water (10 – 120C) while the control rabbits were immersed into water of body temperature (370C) up to their necks for 5 minutes without any anesthetic or tranquilizer. Rectal body temperatures of groups and blood samples were taken for biochemical analyses after cooling and were immediately snaps frozen. The body temperatures of hypothermic animals were lower (P < 0.05) (T2, 34 ± 1) and (T3, 34.2 ± 0.7) compared with the control (T1, 37.9 ± 0.5). However, white blood cell (WBC), lymphocytes (LYM), sodium (Na+) and chloride (Cl-) of hypothermic animals + vitamin E were higher (P < 0.05) than those of control animals. The neutrophils (NEU) of the control and group 2 animals were higher (P < 0.05) than those of group 3 animals. All other parameters of group 3 and the control animals were not significantly (P > 0.05) different. It was concluded that oral supplementation of vitamin E can improve the quality of life by stimulating the immune system, maintain enhanced levels of RBC, Hb, WBC as well as those of Na+ and CL- of domesticated rabbits during short-term hypothermia. Therefore, vitamin E can improve rabbit quality of life during hypothermia.
References
[1]. AOAC. 2000. Official Methods of Analysis. 17th ed. Assoc. Off. Anal. Chem. Arlington, VA.

[6]. Grant, D. R. 1985. A study of some aspects of commercial rabbit production and management. B. Sc. Hons. Thesis, Department of Agriculture, School of Agriculture. University of Edinburgh, Edinburgh, Scotland.